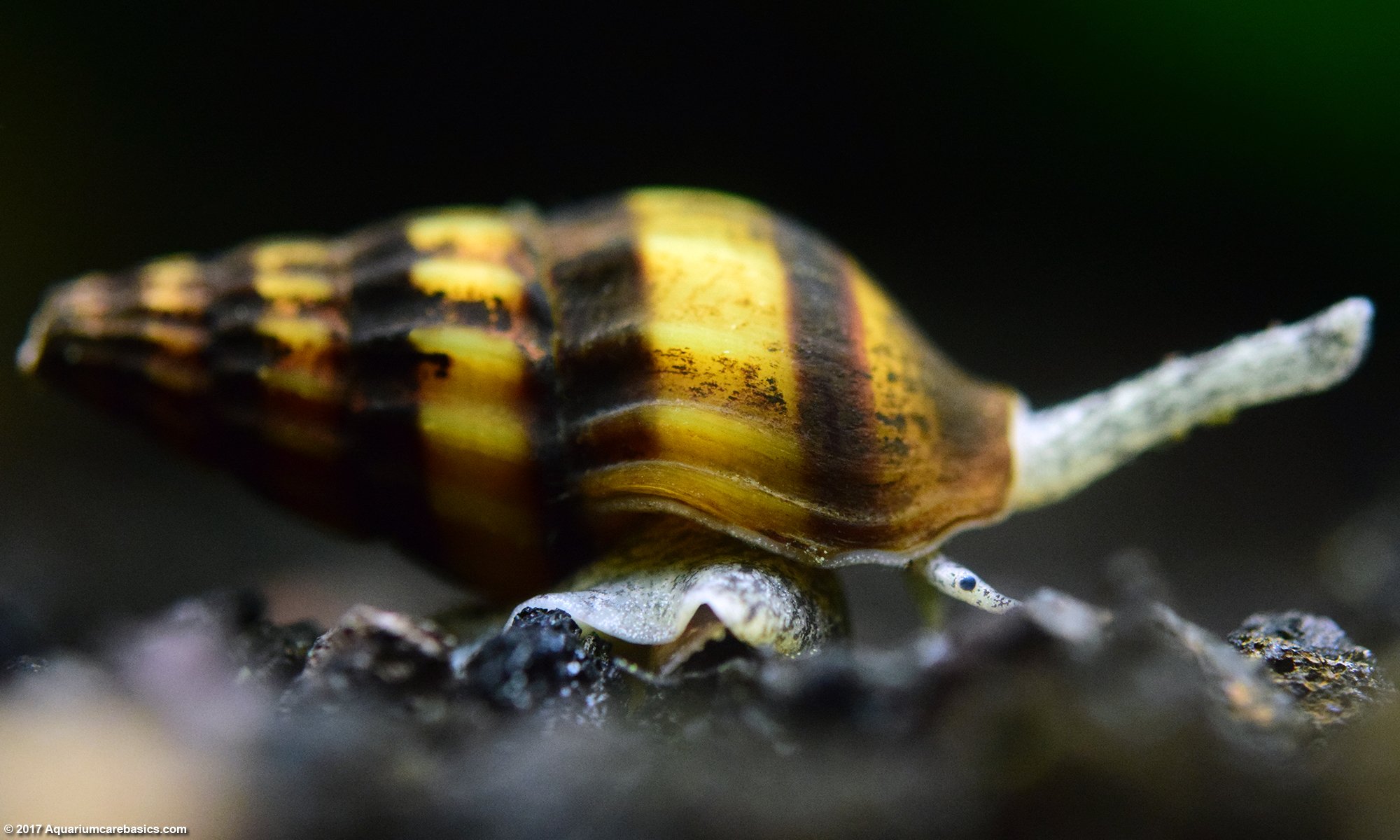 What To Look For When Buying Assassin Snails In Stores

Where Can I See Pictures Of Assassin Snails In Action?

What Are Some Care Issues For Assassin Snails In Freshwater Tanks?

How Big Do Assassin Snails Get?

What Is A Good Tank Size For Assassin Snails In Groups?

How Long Do Assassin Snails Live?

What Do Assassin Snails Feed On?

Do Assassin Snails Breed And Reproduce In Aquariums?

What Are Good Tank Mates For Assassin Snails In Aquariums?

When Buying An Assassin Snail From Stores

When buying Assassin Snails look for specimens that appear active. An Assassin Snail should be affixed to hard surfaces like aquarium glass or decorations. An Assassin Snail has a cone shaped shell, similar to the shells of Malaysian Trumpet Snails and Rabbit Snails. Assassin Snail shells are gold color with a dark brown stripe wrapping around it from aperture to apex. Their shells should appear free from cracks, splits or other damage and their operculum should be visible on the top of their foot near their backside.

An Assassin Snail body and foot are a light cream color, with darker specks sprinkled throughout. Make sure the Assassin Snail has a complete Proboscis, as well as two tentacles, with an eye near the base on each. Be mindful that snails may be kept in display tanks with rougher fish that may take nips at them. So make sure the snail looks healthy, active and complete.

Avoid buying Assassin Snails from display tanks with an unusual amount of dead or sick looking tank mates, as these can be indications of poor conditions and unhealthy snails. Also avoid buying Assassin Snails if the they appear motionless on the tank bottom or floating as these can be indications the snail is sick or dead. Finally, check to make sure the snail shell isn’t empty.

One of the good things is that Assassin Snail care is no too difficult. Its not as easy as caring for some other types of snails, but as long as water conditions are right, and food is plentiful, Assassin Snail care does not take much effort. The keys are tank size and stability. When adding new Assassin Snails to a tank, go so slowly and gently. Try to make sure the display tank water in the plastic bag matches the new tank water parameters as closely as possible.

Assassin Snail Size. An Assassin Snail found in stores will generally be about 3/4 of an inch long. Under the right conditions, a well fed, mature Assassin Snail can grow to be upwards of 3 inches. So hobbyist need to make sure their tank has sufficient size and capacity to support an adult snail’s life. 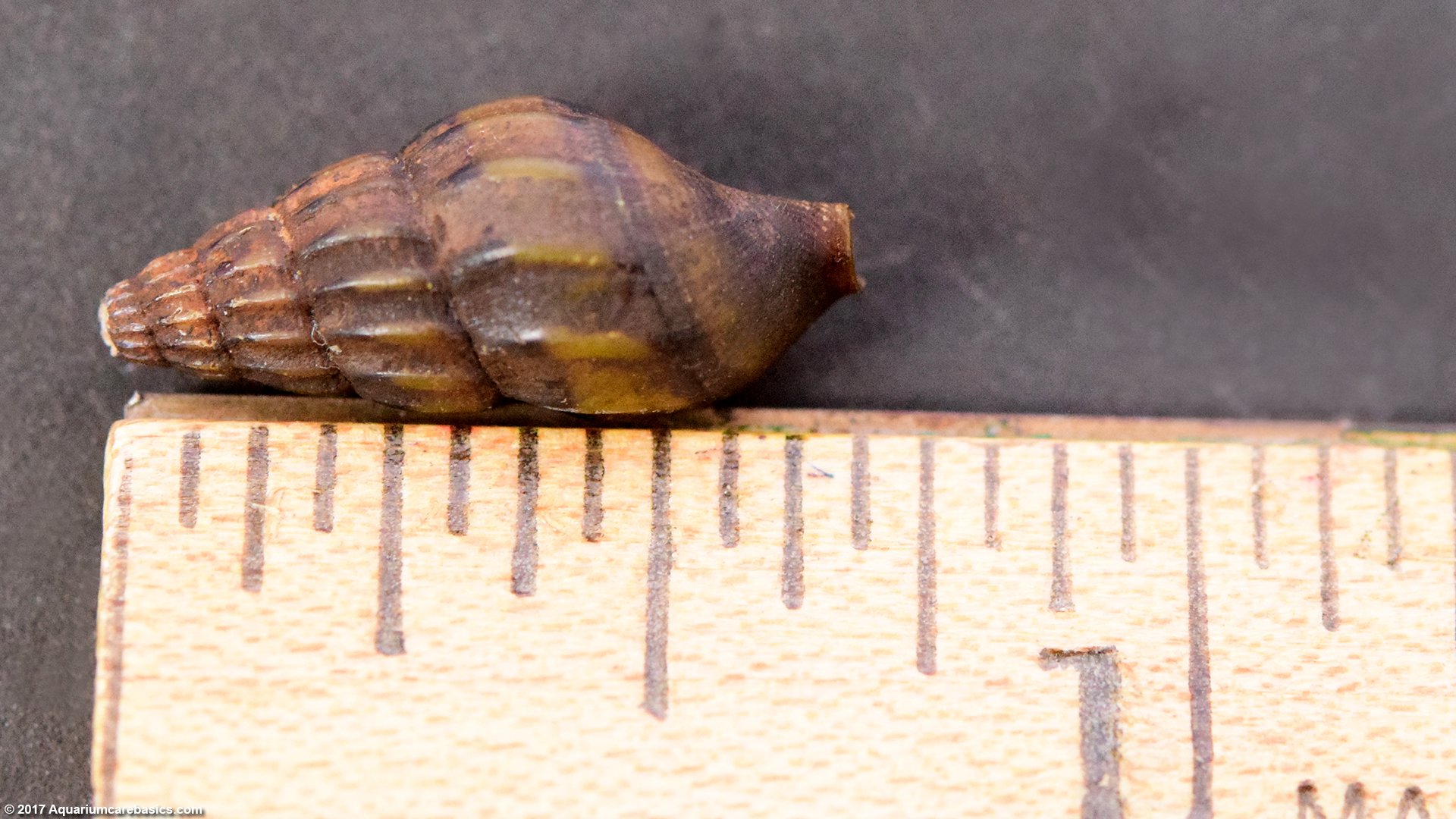 An Assassin Snail does not like sudden shifts in water parameters, so make sure the aquarium is well filtered and heated. Also make sure the tank has fully cycled, established itself, and stabilized before introducing them. Its important to keep Ammonia and Nitrite levels at 0 ppm. Its also important to keep Nitrate levels low with regular partial water changes. Along these lines, be careful when adding medications and plant fertilizers. Assassins may be sensitive to some of their ingredients, especially in high concentrations. This is particularly true with Copper. Copper can be fatal to snails, so double check to make sure any additive is snail and shrimp safe.

Aquarium pH: 7.0 – 8.0. Some hobbyists suggest a wider range is possible.
Temperature: 75 – 80 Degrees Fahrenheit.
Hardness: Water should be on the hard side for shell health and growth.
Lighting: Wide range acceptable.

Another issue related to Assassin Snail care has to do with tank size. Its a good idea to keep Assassin Snails in tanks at least 30 gallons in size. An Assassin Snail does best in aquariums with healthy and stable parameters, and larger tanks have a greater capacity to absorb sudden changes and shifts than smaller tanks do. Also, an Assassin Snail feeds on other freshwater snails, so sufficient numbers of edible snails have to be living in the tank as a food source.

Other Assassin Snail care issues are related snail safety. Tanks should be covered to the extent possible to reduce the likelihood of their escaping from the tank. Along these lines, think about covering power filter intakes with a sponge pre-filter as snails sometimes get their heads and bodies trapped in the slats. They can get seriously injured, or killed.

Finally, since an Assassin Snail is very active, the habitat should have plenty of places to explore. Substrate should be on the fine side as Assassin Snails like to burrow in search of food. Assassins seem to enjoy travelling up and down algae covered aquarium glass, but well fed Assassins do not seem particularly interested in the algae buildup.

A healthy Assassin Snail can live about two years. Lucky snails can live longer if food is plentiful and water conditions are right. Some hobbyists have said their Assassin Snails have lived upwards of five years.

An Assassin Snail is a carnivore that buries itself in substrate, waiting for something to eat. Assassins are particularly fond of eating Malaysian Trumpet Snails, Ramshorn Snails and pond snails that happen to move by. With these snails, its seems to make little difference whether predator is larger or smaller than prey. Snails without an operculum, like Ramshorn Snails, are particularity vulnerable to attack. But even snails with an operculum, like Trumpet Snails, are no match for a hungry Assassin Snail. Assassin Snails may also be interested in eating snail eggs of the soft variety, but not hard Nerite Snail eggs. Assassins may also be interested in shrimp fry. Assassin Snails do not seem interested in eating their own or their own eggs.

With other snails like mature Mystery Snails, Japanese Trapdoor Snails, Nerite Snails, Rabbit Snails, Gold Inca Snails and Ivory Snails, if prey is larger than predator, then prey is generally safe. Other factors related to this are how hungry the Assassin Snail is and whether there is an abundance of smaller snails to eat. But even though larger snails are generally safe, their young may not be. So keep in mind that small, young snails may be at risk to be eaten by Assassin Snails.

Live Plants & Assassin Snails In Tanks. An Assassin Snail is a good snail to keep in a planted tank. Assassin Snails are not interested in eating plants at all, so there is no risk the plants will get devoured. And pest snails may enter a tank by hitching a ride on aquarium plants, so Assassin Snails may really help keep their population in check.

Populations of Assassin Snails reproduce in fresh water by laying eggs. Assassin Snails lay one egg at a time. Groups of single eggs often appear in close proximity to one another. Each egg is yellowish and is contained in a translucent rectangular-like enclosure that is affixed to aquarium glass, drift wood, lava rocks or other hard surfaces. After a few days, the yellowish egg will turn light brown. It takes about two months for the eggs to hatch. Thereafter, the baby Assassin Snails will burrow throughout the substrate as it matures. While Assassin Snails do reproduce, they do not have the reputation of being a snail that will overrun a tank.

Avoid keeping Assassin Snails with rough types like Cichlids, aquarium crayfish, Goldfish or any other tank mate that may injure them or eat them. As always, if there are any questions regarding Assassin Snails and tank mate compatibility, be sure to check with the store clerk before purchasing.