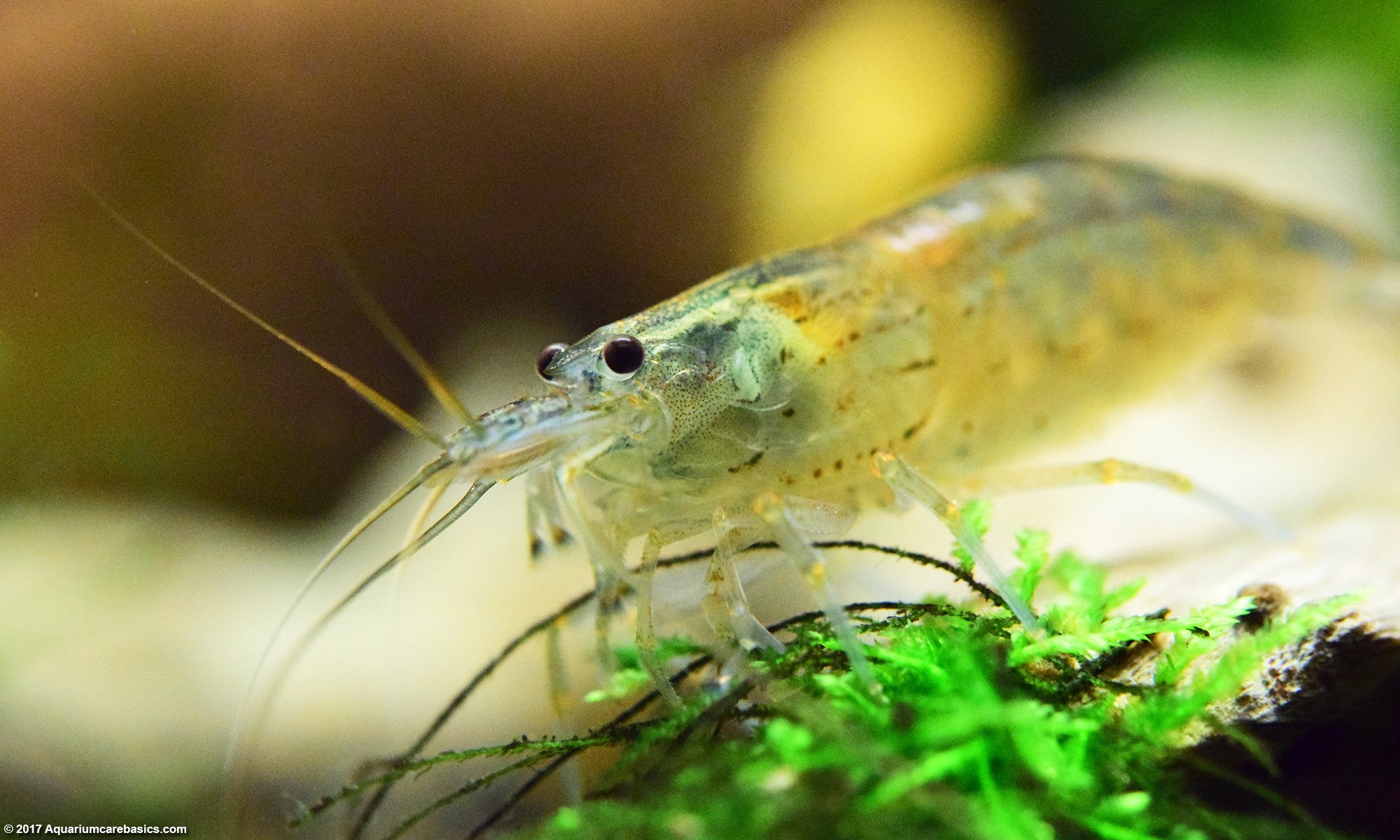 An Amano Shrimp can be kept in tanks of nearly any size as long as the regular rules of fish count are followed. Be mindful not to overstock. Amano Shrimp produce waste and tax an aquatic environment just like every other living organism in a tank. Amano Shrimp like being in a habitat with lots of live aquarium plants that provide them with interesting places on which to climb. They also seem to get a charge out of swimming from plant to plant looking for different places to explore, perch or hide.

A full grown Amano Shrimp size can can be upwards of two inches in length. But in the pet store, Amano Shrimp size is often about an inch in length, or a little less. Buying smaller shrimp is fine because they will mature and grow quickly. Small does not necessarily mean undesirable or unhealthy.

Caridina Multidentata can grow relatively quickly in an an established healthy aquatic environment.

An Amano Shrimp color is generally translucent light grey, They can also be translucent with shades of green, light brown or light reddish-brown. Amano Shrimp color characteristics also include the many solid dots and dashes that run the length of their bodies. These dots and dashes can be grayish-blue or reddish-brown in color. Amano Shrimp also have a narrow lighter stripe on their topside running the length of their bodies, as well as two large eyes, relatively long antennae, long nimble legs, and a wide translucent tail.

Luckily, Amano Shrimp care is relatively effortless requiring little hands-on attention. Amano Shrimp like living in both small and larger groups, and do well living with their own kind. They are comfortable being both out in the open and exploring little hiding places, and they like anything in a tank that they can pick on. That’s why having aquarium plants in the tank is a good idea. Amano Shrimp are adaptable and hardy, but they do best in stable, established water in the tropical freshwater community tank range:

Amano Shrimp seem to like water that is on the hard side, well circulated and with a current that is moderately moving. And as with other freshwater aquarium shrimp, be careful with medications, Ammonia spikes, high Nitrate levels, and most importantly avoid copper.

An Amano Shrimp lifespan is between two and three years. That said, they sometimes die right after being added to a tank. This is most likely the result of stress from transport or shifts in water parameters. But if water conditions are right, food is plentiful and predators are absent, these algae eating shrimp should have long and healthy lives.

When an Amano Shrimp dies it will turn bright orange. Other shrimp or snails may start eating its shell to ingest its minerals. But after they appear done with it, its a good idea to remove the dead shrimp from the tank as to avoid Ammonia Spikes.

Fortunately, Amano Shrimp feeding is relatively easy. Often referred to as algae eating shrimp, Caridina Multidentata have a reputation for being industrious aquarium cleaners. They enjoy feeding on some forms of soft algae.

In addition to aquarium algae, Amano Shrimp feeding can include food sources that occur naturally in a planted tank. Live aquarium plants continuously shed edible matter. Caridina Multidentata will eat the dead plant matter that would otherwise accumulate on the bottom. So its best not to keep Amano Shrimp in a tank that is “too clean”. Aquariums that are “too clean” may not have enough natural food sources to support the shrimp. Amano Shrimp feeding can also include: shrimp pellets, fish pellets, fish food flakes, algae wafers, raw green zucchini and blanched spinach.

Whole or Ground Up

Fish flakes, shrimp pellets and algae wafers can be either put into the tank whole or ground up into smaller pieces. If pellets are added whole, Amano Shrimp will be quick to grab a pellet. And Amano Shrimp will steal pellets from other shrimp. If pellets are ground up and the fine particles poured in, it creates a cloud of food that may send the shrimp into a feeding frenzy. Either way, standard aquarium feeling rules apply. Do not overfeed and only feed what can be eaten in a reasonable amount of time. 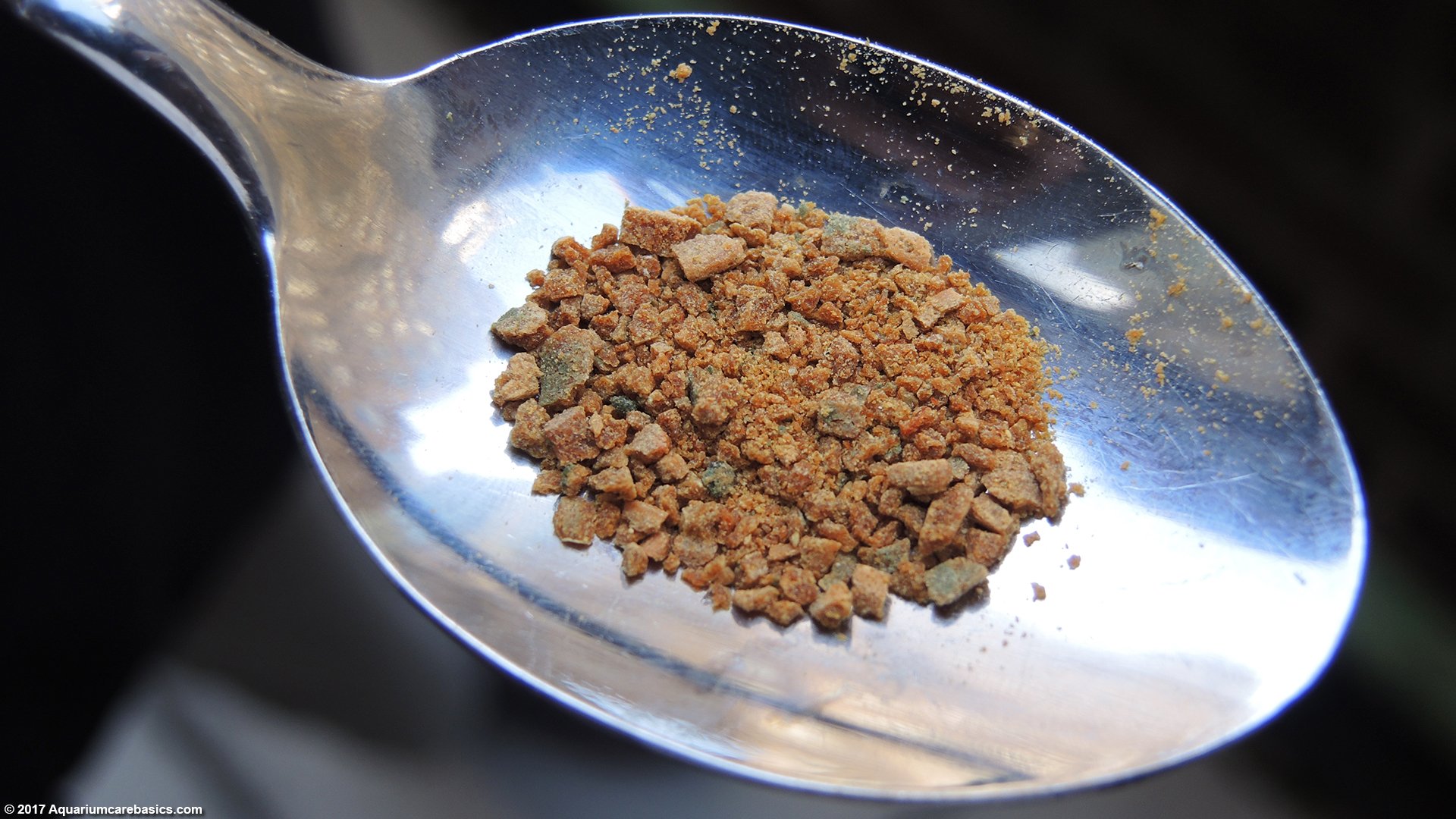 It is interesting to see how Amanos behave when supplements are added in small amounts. A group of Amanos can be busy eating algae off the tank bottom on one side of the tank. When one bottom feeder pellet is dropped in on the opposite side, the Amanos will sense it and move toward it. They begin to hop-swim across the bottom to get to the food first. Its like they “converge” on a hot spot. Whichever Amano gets to the pellet first keeps the food until a larger shrimp appears. Its really fun to watch.

Caridina multidentata feeding habits also include eating dead fish and snails. These should be removed from the tank as soon as possible to avoid Ammonia spikes. It’s also likely that Amano Shrimp may be interested in eating fry.

Interestingly, Amano Shrimp seem particularly fond of Marimo Moss Balls. Caridina Multidentata do not eat moss balls per se. Instead they like to climb on the moss ball, picking off little bits of food as they travel across the surface. Amano Shrimp also like tanks with a sponge filter. Sponge filters catch bits of edible material that these shrimp feast on.

A good example of this is a common aquarium algae: Green Spot Algae. This form of algae is green, hard, and grows in clusters of little circles on solid surfaces in a tank. A beginning aquarist my see Green Spot Algae and be tempted to get some algae eating shrimp to take care of the problem…only to find out twenty dollars later that Amano Shrimp don’t eat hard green algae like Green Spot Algae.

So think of Amano Shrimp not just as algae eating shrimp, but instead as great scavengers constantly astir, working tirelessly as industrious tank cleaners, feeding on otherwise uneaten bits of food and picking at particles of edible material too small to be seen by the naked eye. To that extent, Caridina Multidentata help with overall tank cleanliness. and this is a contributing factor to a healthy aquatic environment that will help keep algae issues under control. So don’t rely solely on aquarium algae as the main food source for these creatures.

Molting occurs when an Amano sheds its old shell and grow into a new one. Because the empty shell looks like the shrimp is missing, many new hobbyists think the shrimp has died. Amano Shrimp molting occurs once every five or six weeks, give or take. Its sometimes challenging to determine precisely when molting occurs because Caridina Multidentata are often kept in larger groups. With all of them stirring about, its tough to identify which shrimp molted when. Immediately after molting, Caridina Multidentata may feel vulnerable so they may hide for a bit until their new shell is ready.

Amano Shrimp feeding also may include eating the empty shell, so leave it in the tank for a day or two. Caridina Multidentata need to re-ingest the minerals contained in the empty shell to help them get ready for their next molting cycle.

Pick Tank Mates Carefully: Amano Shrimp tank mates should not include aggressive fish such as Goldfish, cichlids or other roughens, or the likes of a aquarium crayfish, Tangerine Lobsters, or Hammers Cobalt Blue Lobsters. Care must be taken because the Amano will be attacked and eaten.

Finally, Amano Shrimp tank mates can include others of their kind, as well as most small to midsize non-aggressive community tank inhabitants including Otocinclus Catfish and Cory Catfish. Freshwater snails can include the likes of Nerite Snails, Malaysian Trumpet Snails, Mystery Snails, Golden Inca Snails, Ivory Snails, Rabbit Snails, Japanese Trapdoor Snails, Assassin Snails and Ramshorn Snails. Other tank mates can include other freshwater shrimp like Bamboo Shrimp, Vampire Shrimp, Red Cherry Shrimp and Ghost Shrimp provided the Amanos are larger. As with other species, if there are any questions regarding compatibility, check with the store clerk before purchasing.

Amanos are generally friendly. They go about their business searching the tank for naturally occurring food without incident. Amanos seem quite content feeding alone or in groups of others of their kind. But if there is only one pellet dropped in a tank, a large, dominant Amano will grab it and pull it to a safe place to eat. The large shrimp will move its body in a way that scares off smaller Amanos, Ghost Shrimp and Cherry Shrimp. If a smaller Amano gets to the pellet first, it had better eat fast. If a larger Amano appears, the food will be taken. Along these lines, large Whisker Shrimp will often out-rank even the largest Amano when it comes to feeding priority. So there is definitely a pecking order to feeding with supplements.

In non-scientific terms, an Amano’s anatomy is similar to other small freshwater shrimp. Amano Shrimp have sets of antennae that grow outward from the sides of their heads, starting below their eyes. They also have two pairs of antennae that grow forward from the front of their heads in front of their eyes. They have a translucent carapace section from which its legs are attached on the underside. Moving back from the carapace, are its abdominal sections. These sections are connected in a way to give the abdomen flexibility.

An Amano can often be seen arching its abdominal section, looking much like an upside-down “U”. The last abdominal section connects to its tail. The tail is comprised of flatter, thin, clear shells. These portions can expand or contract slightly allowing for the tail to become either a little wider or a little narrower, as needed. On the edges of these thin tail shells are extremely fine hair-like filaments. These filaments resemble short bristles on a very fine brush. 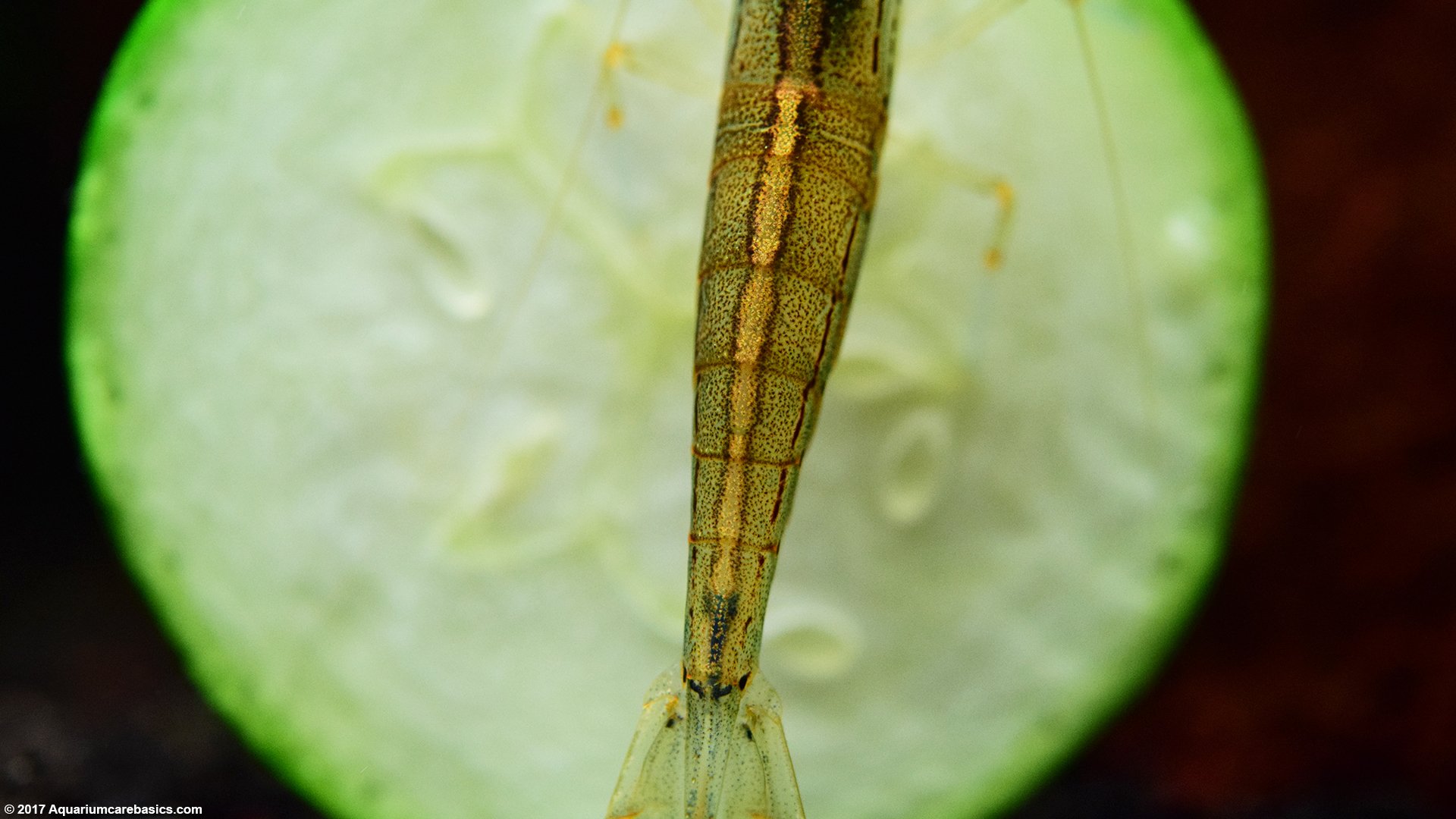 So before buying, make sure the Amano has all of its body parts. Look especially closely for its eyes and antennae pairs. Often these shrimp are kept in display tanks with roughens that may take nips out of them.