A Mystery Snail body is spotted with orange dots sprinkled across its head and body, providing an intriguing accent color. Orange accents also appear across the top portion of its mouth, as well as on its tentacles and siphon. On the tentacles and siphon, the orange accents appear more like lateral dashes as opposed to round spots. Black dashes also appear on its siphon. A Mystery Snail has orange rings appearing around its eyes, where their eyes rest on the tip of their eye stalks. A Mystery Snail also has an operculum that serves as a “trap door” used to seal itself in its shell.

Most questions regarding Mystery Snails come from the following areas:

What To Look For When Buying Mystery Snails

Where Can I See Pictures Of Mystery Snails

What Are Common Behaviors Of Mystery Snails?

What Are Common Care Issues For Mystery Snails?

What Are Some Good Tank Mates For Mystery Snails

Mystery Snails in a 30 Second Video

When Buying A Mystery Snail

When buying Mystery Snails, look for snails with thick, non-pitted, non-cracked shells. Having thin, excessively pitted or cracked shells may be evidence the snail is unhealthy. It can also mean the snail has been in acidic water long enough to dissolve the shell and weaken it. And make sure the Mystery Snail shell does not have holes.

Look for Mystery Snails that are stuck on the aquarium glass or moving across hard surfaces. If Mystery Snails are laying still on the bottom of the tank, laying upside down or floating on the surface of the water, it may indicate the Mystery Snails are dead or dying. Finally, keep in mind that Mystery Snails can be kept in stores with tank mates that may bite off their tentacles, eye stalks and siphon. So make sure the snail looks healthy, complete and intact before selecting.

Mystery Snail Shell Size: In the display tank, a Mystery Snail shell size can be about two inches in diameter. Some snails may be smaller, or some a bit larger, but two inches around is probably most common. Larger shells are not necessarily healthier snails. 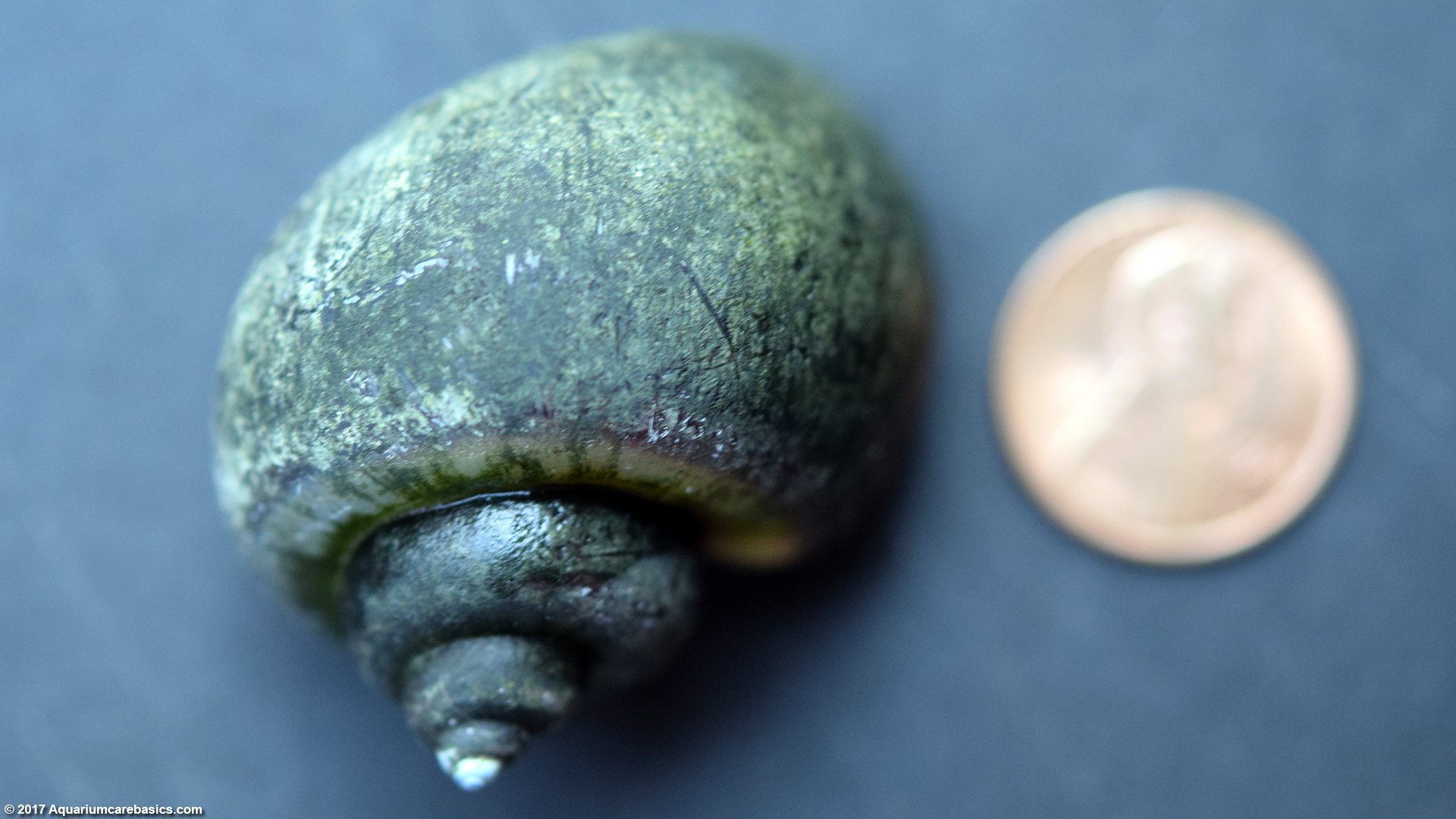 It is often thought that Mystery Snails are slow moving creatures. For the most part this is true. But there are times when Mystery Snails can be seen moving very quickly across aquarium glass. Mystery Snails are also known to climb to the tops of tanks near the water surface and then all of a sudden let go of the surface and rapidly free fall to the tank bottom. On some occasions when this free fall occurs they simultaneously release a couple of large air bubbles out from under their shells on the way down. On other occasions, they do not totally release their foot from the glass. Instead it just loosens its foot a bit, sliding down the glass quickly while maintaining a bit of control on the way down.

Mystery Snail care is pretty easy and straight forward, making this species a good choice for beginners. That said, there are a few care issues to keep in mind:

Mystery Snails Can Escape: Mystery Snails are expert “escape artists”. They are very good at finding ways out of the tank. Its important for hobbyists to do a periodic snail count to make sure all snails are accounted for. Escaped Mystery Snails can die from drying out, or get injured when falling from the tank. So its very important to keep a tank covered to the extent possible. If there is even the smallest gap in coverage, the chances are a Mystery Snail will find it.

Tank Size: Another Mystery Snail care issue concerns tank limitations. A tank’s limitations are primarily determined by aquarium dimensions, water volume and surface area. It’s common for a new hobbyist to add a bunch of Mystery Snails to an aquarium as an “aquarium cleaning crew”. While Mystery Snails can do a good job helping keep the tank clean, they also add to the bio-load of the tank like other living organisms. In that way, a Mystery Snail is just like any other tank inhabitant. They feed from the tank and they produce waste into it.

Water Conditions: Mystery Snails can do well in a wide range of aquarium water conditions. Avoid sudden shifts in temperature and water parameters because instability can be stressful to snails. The tank should be stable, cycled and established before putting snails in. The tropical community fish tank range is a safe choice. Mystery Snails seem to also like moderately moving, clear, oxygen rich water. A Mystery Snail also seems to adapt to environments with slower moving, murky water. But for aesthetic purposes, many hobbyists like keeping Mystery Snails in tanks with clear water.

Ammonia and Nitrite levels should be at 0 ppm. Nitrate levels need to be kept from building up with regular partial water changes. Plant fertilizers, tank medications and treatments can be problematic as Mystery Snails can be sensitive to their ingredients. This is especially true for additives containing copper. Copper can be fatal.

A Mystery Snail prefers to be kept in aquarium water on the hard side with calcium levels sufficient to maintain healthy shells and adequate growth. Cracked, thin or excessively pitted shells can be signs of Calcium deficiency. When keeping Mystery Snails it may be a good idea to buy a Calcium test kit as well as a kH test kit. Depending on the results of those tests, periodic Calcium supplements may be necessary. But be careful with pH shifts.

Trying to rescue Mystery Snails trapped in a filter intake may further injure the snail or kill it. In this situation, its best to turn the filter off for a bit to see if the snail can wiggle its way out of trouble. But the better choice is to avoid the issue from the start by placing sponge pre-filters over strong filter intakes before the snails go in.

Sensitivity: Mystery Snails are sensitive to the touch and to sudden changes in light. Regarding touch, Mystery Snails seem able to differentiate between safe touches and unwanted touches. If a snail is openly feeding and is touched by an aggressor, the snail can react very quickly, folding its body back into its shell, protecting its eyes and closing its operculum. Yet at the same time, the same snail can be open and be bumped into by another snail and seem not concerned at all.

Another defensive reaction is when sensing danger. The snail will just let go of whatever it is on and allow itself to drop to the tank bottom, closing shut its operculum on the way down. What makes this free fall behavior more interesting is how the snail sometimes reacts to sudden bright light. The snail will often release its foot from the hard surface and free fall, but not recoil within its shell and closed operculum. Instead the snail simply lands on the tank bottom and resumes its business as if nothing has happened. Its as though the snail can tell the difference between imminent danger from an aggressor as opposed to merely being startled by a sudden bright light flash.

A Mystery Snail seems content living in a planted aquarium. A Mystery Snail is a scavenger and live plants never let a tank stay “too clean”. Thanks to the vegetation, there’s almost always a plentiful source of food. Shed plant matter accumulates on the tank bottom for snails to eat. The Mystery Snail diet can be based on detritus and debris from this source.

Mystery Snail Diet: A Mystery Snail diet also includes a wide range of other naturally occurring food in a tank. Favorite natural food sources can be forms of soft filmy algae that accumulate on slow growing plant leaves, aquarium glass and other hard surfaces. They often find algae sources growing on aquarium glass right below the surface of the gravel. They will sometimes dig a bit to get to the algae.

Supplements And Blanched Vegetables: Even if naturally occurring food sources are preset, a Mystery Snail diet also should include combinations of bottom feeder tablets, pellets, fish flakes, and algae wafers to help provide a balanced diet. In addition to store bought food, a Mystery Snail diet can have washed soft blanched vegetables such as green zucchini squash, leaf lettuce and iceberg lettuce. Each snail is different so test different vegetables to see what works. Generally, if a snail is not interested in a vegetable or food supplement after a day or two, remove it from the tank. Leaving uneaten food in the tank can cause water quality issues relatively quickly.

A Note About Mystery Snails And Live Plants: Some hobbyist say that Mystery Snails will devour live aquarium plants. Since the term “Mystery Snail” is sometimes used loosely in pet stores, its tough to know whether a particular snail will eat live plants. Other factors have to do with the type of plants in the tank and how well fed the snail is. Well fed Mystery Snails getting a balanced diet may be less likely to eat plants until they are ruined. If a Mystery Snail is interested in eating away plants, it should be less of an issue with hardy, durable hard-leaf plants like Anubias Barteri.

On the other hand, soft delicate plants like floating Salvinia may be more apt to be eaten. Maybe keeping a supply of floating Salvinia in the tank may be the plant a snail goes for, leaving the other plants alone. Different hobbyists have different experiences with Mystery Snails and plants, so its good to ask the store clerk before buying.

Dead Mystery Snail: As with other freshwater snails, it’s not difficult to identify a dead Mystery Snail. The snail’s behavior is a good indicator. If the Mystery Snail is floating in the water for longer than ordinary, is motionless on the tank bottom, is upside down or swollen out of its shell, gently remove the snail with a fish net. Dead snails give off a very strong, repugnant order. If this strong rotting smell is present, the snail is dead and should be kept out of the tank. If the odor is not present, place the snail back in the tank right-side up. Should the snail remains in that position for longer than usual, check again for the strong odor, as the snail may be dying. A dead Mystery Snail should be removed from a tank as soon as possible to avoid water quality problems such as Ammonia spikes.

Goldfish and tough roughens like aquarium crayfish, Striped Convicts, Jack Dempsey, Oscars and other cichlids should be avoided. They may attack a Mystery Snail. Tough customers can pick at the snail, yanking off its eyes, tentacles or both. Or worse, they can eat the Mystery Snail outright.

As always, if there are any questions about tank mates and compatibility, check with the clerk at the store to get his or her input as to whether a species will make good tank mates for a Mystery Snail.

A resource with more information on aquarium snails.