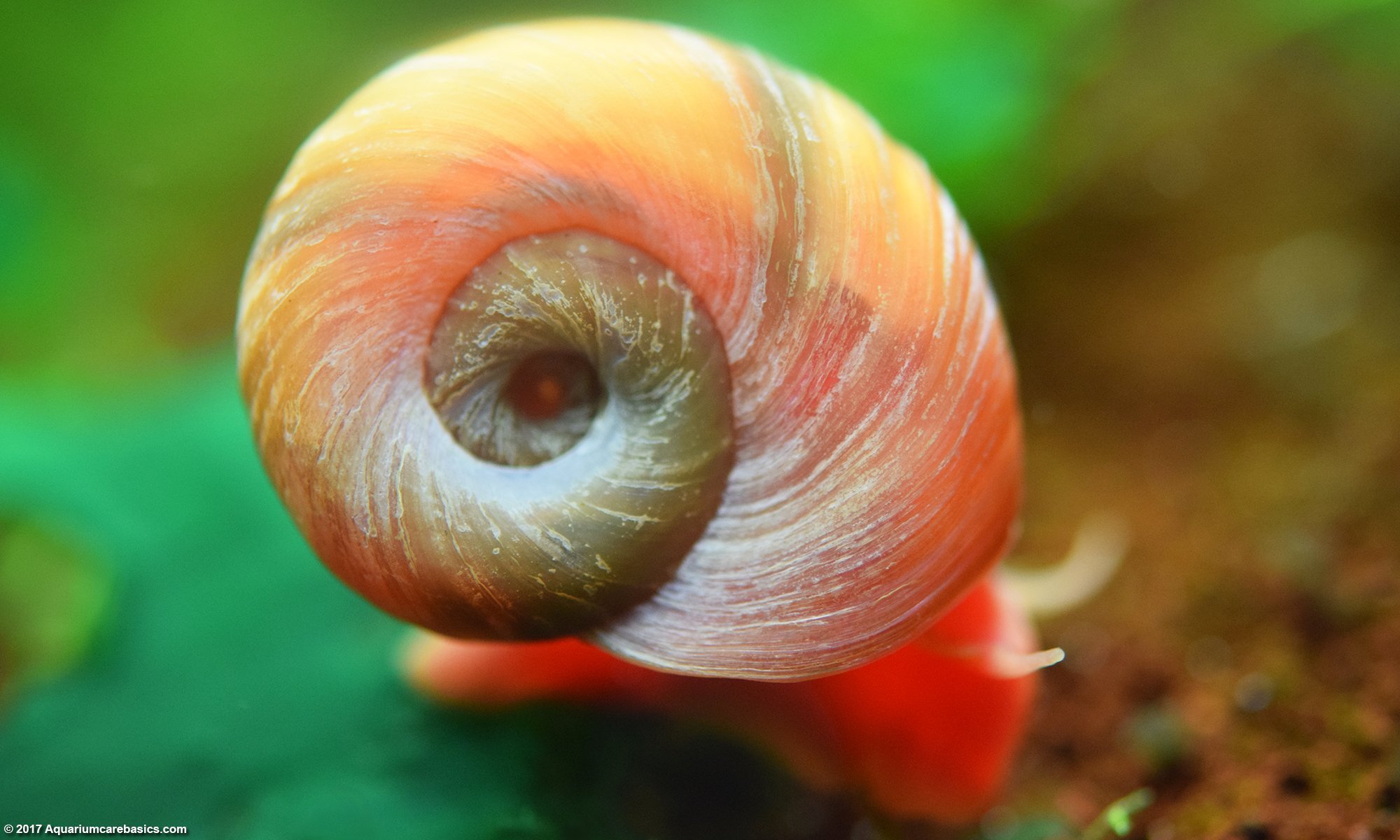 What To Look For When Buying Ramshorn Snails

Where Can I See Pictures Of Ramshorn Snails?

How big do Ramshorn Snails Get?

What Do Ramshorn Snails Eat?

What Are Good Tank Mates For Ramshorn Snails?

Keeping A Ramshorn Snail As A Pet

When Buying A Ramshorn Snail

Make sure the snail has both tentacles coming out from the top of its head. Avoid snails looking dormant and lying motionless on the bottom of the tank. Also avoid snails that are floating or not stuck on hard surfaces. Finally, avoid snails kept in display tanks with other dead, dying, diseased or sick looking tank mates.

Tank Size: A Ramshorn Snail can do well in nearly any size tank, from small tanks like 5 or 10 gallon setups to much larger ones, provided the rules regarding fish count are followed. Although a Ramshorn Snail is not the escape artist like some other snails are, its best to keep the tank covered to the extent possible.

A Ramshorn Snail seems to enjoy being in water within the community tank range:

When keeping Ramshorn Snails, it’s important to test tank water regularly. Make sure Ammonia and Nitrite levels are at 0 ppm, and control Nitrate levels as well as organic matter accumulation with regular partial water changes. As with other shelled tank mates, be very careful when using medications and plant fertilizers as some of the ingredients may be harmful. Most importantly, avoid copper. Even in small amounts, copper can be fatal.

What Do Ramshorn Snails Eat? These snails spend alot of time on the hard surfaces of a tank searching for something to eat. Ramshorn Snail food sources include dead or decaying plant matter, soft algae, uneaten food and fallen tank mates. Ramshorn Snail food should also include a variety of fish flakes, pellets, bottom feeder tablets, algae wafers and calcium-rich supplements. Calcium is important for healthy shell growth. As for feeding, feed in small amounts and no more than the snails can eat in 5 minutes.

Ramshorn Snail food can also include dead fish, snails or shrimp. Even though a Ramshorn Snail will eat dead fish and snails, its best to remove the deceased to avoid ammonia spikes and other water quality issues. A Ramshorn snail can also interested in eating dead aquarium shrimp. Ramshorns seem particularly interested in feeding on molted Bamboo and Amano shrimp shells. Some hobbyists let the snail feed on the shell for a while so it can ingest some of the minerals. When the snail is finished feeding, simply remove the remaining portion of the shell from the tank.

One interesting thing to observe are Ramshorn Snails eating in groups. Ramshorn Snails are very active, moving about the tank during the day and night on the prowl for food. When one Ramshorn finds a source of food, other snails will migrate to the area. The group of snails will devour the food until gone. Often, clumps of snails actively move to position themselves in just the right spot to get the best bite.

Fresh Vegetables: An often overlooked Ramshorn Snail food source are fresh vegetables. Rinsed green lettuce leaves, spinach leaves and even green zucchini slices are good choices. While small amounts of fresh vegetables can be added directly to a tank, it may be a good idea to quickly blanch the vegetables to soften them before feeding. Figuring out whether the snails are interested in eating vegetables may be trial and error, so experiment with a variety of choices. Interested snails will find the food quickly start eating. As a general rule, if the snails are not interest in eating the vegetables within 24 hours or so, remove the food from the tank. Too much uneaten food in a tank can cause water quality issues.

Growth Rate: A Ramshorn Snail eating a balanced diet of debris, aquarium algae, vegetables and commercial supplements will grow quickly and steadily. This is particularly true with Calcium. If Calcium levels are sufficient, a Ramshorn Snail swill grow thick, healthy, crack-free shells. If food is less plentiful, or if Calcium levels are insufficient, growth rate will be slower. Shells will be thinner with signs of small ridge-like cracks. Therefore, it’s a good idea to feed Ramshorn Snails commercial food fortified with Calcium.

Regarding Live Plants: Some hobbyists say that Ramshorn Snails will eat live plants. Others say that they rarely have issues. While a Ramshorn Snail may sometimes be interested in eating plants with soft, delicate leaves and stems, alot has to do with the hardiness of the plant and how well the snail is otherwise fed. Keeping hardy plants with durable leaves like Anubias Barteri should not be a problem. And keeping Ramshorn Snails well fed on a diet including fresh leafy vegetables should also help reduce the chances that live plants will be eaten.

Lifespan: Healthy, well feed Ramshorn Snails have a lifespan of about one year. Some snails can live longer than one year with a bit of good fortune. That said, it’s not uncommon for some Ramshorn Snails to die shortly after being added to a tank. Death may be attributable to stress during transportation or the shift in parameters between the water in the display tank and the home tank. But either way, the possibility of quick death exists and is worth a mention.

A dead Ramshorn Snail will most likely be lying motionless on the tank bottom. If the snail is still and motionless for an unusually long period of time they are probably dead. Their bodies will begin to decompose. After a couple of weeks, their shell can show visible signs of thinning out and holes may begin to form. While the general rule is to promptly remove dead inhabitants from a tank as soon as possible, some hobbyists leave the dissolving shells in the water so their minerals can make their way back into the water column.

Ramshorn Snail reproduction is one of the challenges that hobbyists face with this pet. Reproduction can be swift and robust. They lay egg clutches on hard surfaces soon after being added to a tank.

The egg clutches are clear, jelly-like globs containing what appear to be about one dozen round areas, each with a little dot. These egg clutches can be most noticeable when they are laid on aquarium glass, but for every visible egg clutch, there are undoubtedly sever others hidden on other hard surfaces. After a couple of days, each little dot appears less clear and more translucent-white in color, and the shape of each baby snail can be seen. Soon thereafter, the little translucent-white snails can be observed wiggling their way out of their egg and moving away from the clutch. One way hobbyist control Ramshorn Snail reproduction is to control feeding. The more Ramshorn Snails eat, the more they reproduce, everything else equal.

A Ramshorn Snail is tranquil and non-aggressive, with no way to defend itself other than retreating into its own shell. A Ramshorn Snail does not even have a operculum to seal itself into its shell like a Gold Inca Snail does. Ramshorn Snail tank mates should include other calm and peaceful community tank fish with Cory Catfish and Otocinclus Catfish being particularly good choices. Tank mates can also be freshwater shrimp such as: Bamboo Shrimp, Amano Shrimp, Ghost Shrimp, Red Cherry Shrimp and Vampire Shrimp. Ramshorn Snail tank mates can also include other snails including Nerite Snails, Gold Inca Snails, Ivory Snails, Mystery Snails, Trumpet Snails and others of their kind. Even Freshwater Clams and Ramshorn Snails can be good tank mates, provided the conditions are right.

Ramshorn Snail tank mates should not be aggressive fish like cichlids, goldfish or other fish that can do harm to a small defenseless snail. Aquarium crayfish like Hammers Cobalt Blue Lobster and Tangerine Lobster are also not good tank mates because they can capture and eat a slow Ramshorn Snail.